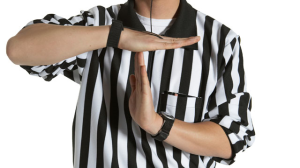 I played basketball in high school.  I remember the conditioning we went through, including stair-laps around the gym and the infamous “killers,” which were sprints that began and ended with jumping.  I remember our coach timing those and making us continue doing them until the whole team came in under a time designated by the coach, and yes, tenths-of-a-second counted.  In those practices we always worked on the basic skills of dribbling, passing, shooting, and moving without the ball.  Every practice ended with us taking foul shots and recording the outcome with the coach.  Practices also consisted of intra-squad scrimmages so we could apply our skills in a setting more like that of a real game.  When practice was done, we hit the showers and headed home.  But practices weren’t what the season was all about.  Practices were about the game.

During the game, coach called time-outs.  He did not call time-outs during practices because coach could interrupt the practice whenever he wanted to instruct or strategize.  However, during a game, he had to use a time-out for that purpose.  Time-outs were on the clock and he only had so many to call during a game.  He called time-outs for various reasons.  Sometimes our opponent had a series of  fast-breaks and piled up some quick scoring, so coach would call a time-out to interrupt their momentum, to allow us to catch our breath, and to regroup.  There were times, he would call a time-out so we could set up an in-bounds play.  I can remember times when he called a time-out to chew us out for a series of bad plays, whether it was not thinking, laziness, or unsportsmanlike conduct.  Other times he called a time-out to encourage us to hang tough and keep our heads in the game.  No matter the reason, when the time-out was over, we headed back into the game.  Though we needed the time-out, the time-out wasn’t the game.

Sunday worship services are like time-outs.  They are a time to regain focus on God; to remind each other of the gospel; to exhort and encourage each other not to drift, but to hang in there.  Any given week, the enemy will run fast-breaks and pile up points against us.  The events of any week can exhaust us emotionally, physically, and spiritually.  We constantly face decisions both large and small.  We make mistakes.  We get lazy and distracted.  We sin.  We lose sight of the goal.  A Sunday worship service is like coach calling, “Time-out!”  In the presence of God we catch our spiritual breath as we think, confess, and recommit.  When the time-out is done, we don’t go sit on the bench.  We get back in the game.  When the worship service is done, the worshipper is not done, because the worship service itself is not the game.  The true worship of God recharges us to get back in the game, hearts ready, hands and mouths prepared to serve God.

It goes without saying that worship is not contained to a worship service.  But it does need to be said that the goal of the believer is not attending worship services.  The goal of the believer is being sent forth as a worshipper to be a witness to the world.  Worship stirs an inward desire to declare God’s glory and tell others about Jesus Christ.  It was Isaiah’s worship encounter that led to his confession, “Here am I, send me!”

I hope you’ll take a time-out this weekend, and then get back in the game!