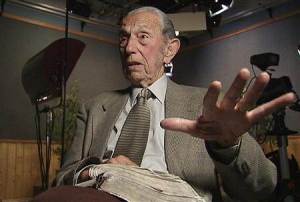 It’s May 22 and I’m still here on planet Earth.  No massive earthquake.  No sudden disappearance of millions of people.  Either I missed the rapture, or there really is no such thing as a rapture, or Harold Camping was wrong, or he is just a teacher who at 89 has gone senile.  Some would say all four are true.  I opt for the third and would be tempted to to endorse the fourth except that this isn’t the first time he’s made a false prediction about the rapture.

Though I am tempted, I am not going to join the multitudes who are now making fun of Camping because I believe there is nothing funny about his false teachings and the harm he has done to those who believed him, to the reputation of Jesus Christ in the world, and to the constantly pummeled evangelical identity.  He has provided plenty of fodder for the nighttime comedians.  I can picture Bill Maher playing with great delight the role of Camping on a Saturday Night Live spoof of this disgraced teacher.  The sad thing is the mocking doesn’t stop at Camping.  It extends to all who believe in the return of Christ and the reality of a coming day of judgment.  I am one of those.

Just how many times does a prophet have to get his predictions right in order to be judged a true and reliable prophet?  If I understand the Bible correctly, I think a true prophet is supposed to bat 1000.  If that’s the case Harold Camping is a fraud.  His prophetic batting average is a goose-egg.  He was wrong in 1994, and again in 2011.  He’s just plain wrong.

And he’s not just wrong about the return of Christ.  He’s wrong on Bible interpretation: it’s not a book where truths are unlocked with secret formulas and sophisticated mathematical calculations.  I can’t stand numerology!  He’s wrong about the destiny of the unsaved: He’s an annihilationist.  That may be comforting to some, but it’s not orthodox Christian teaching.  He’s wrong about the Church: He believes the Church age is done and God is no longer working through local churches which he declares have become apostate, so they should be abandoned in favor of home Bible studies and listening to his radio station.

I truly pity that people who follow him.  They’ve been duped by someone who, though he may be sincere, is still wrong.  One follower spent more than $140,000 of his savings on posters advertisements for subway and bus stations in New York City.  What do he and other like him do today?  You talk about people who become embittered against the Bible and Christianity — following teachers who misinterpret and misrepresent both have left too many in that condition.

Camping’s warnings should not be heeded.  His teaching should be soundly rejected.  It’s time to permanently retire him from the Bible-teaching batting order and never let him in the line-up again.

This entry was posted in Uncategorized and tagged Rapture, Return of Christ. Bookmark the permalink.